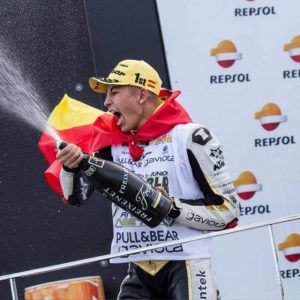 Raúl Fernández Madrid rider (Angel Nieto Team) was proclaimed champion of the Moto3™ JWCh after the qualifying practice for the final round of the FIM CEV this weekend at the Ricardo Tormo Circuit. Due to the absence of his rival for the title, the Italian Manuel Pagliani (Leopard Junior) – was confirmed, the Angel Nieto Team rider was able to officially celebrate the championship title, the first in Moto3™ for a Spanish rider since Álex Márquez in 2012. With this title, Raúl Fernández, 18 years old, follows Italian Dennis Foggia, champion in 2017.