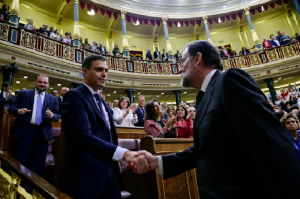 Read the text below and answer the questions

Several years ago, Pedro Sánchez, the Socialist leader from PSOE, used a televised election debate to mount an attack against then Spain’s prime minister, Mariano Rajoy.

He accused him of overseeing corruption in the Popular Party. “The prime minister must be a decent person,” Mr. Sánchez told Mr. Rajoy. “And you aren’t.”

But Mr. Rajoy kept his nerves, brushed off the accusation and went on to use it as evidence that Mr. Sánchez was a disrespectful politician.

Last Friday, it was Pedro Sánchez who presided over the downfall of Mariano Rajoy, using the corruption charge against the prime minister to devastating effect. After a court ruling found that Mr. Rajoy’s party had benefited from a slush fund, Mr. Sánchez orchestrated a parliamentary revolt, winning the backing of a majority of lawmakers to oust Mariano Rajoy through a vote of no confidence.

Only for our students from Centre Point.

Find the definition of the words marked in red and send them to info@centre-point.org